The Orchidee project was established across several laboratories and it is dedicated to development of the global Land Surface Model (LSM) ORCHIDEE and its use for a wide range of applications from land surface processes to climate studies. The different steps of the ORCHIDEE model/project genesis are summarized in the figure below.

The genesis of ORCHIDEE

During the 1980s, the development at the Laboratoire de Météorologie Dynamique (LMD) of a global General Circulation Model (GCM) stimulated the development of a specific land surface model to calculate the energy and water balance of terrestrial ecosystems (Laval et al., 1981). In the early 1990s, the model was substantially refined with a description of the earth surface categorized into several biomes called PFTs (Plant Functional Types) which led to a version, named SECHIBA (Ducoudré et al., 1993). In the late 1990s and in the early 2000s, the Dynamic Global Vegetation Model (DGVM) ORCHIDEE (Krinner et al., 2005) was created, based on the coupling of SECHIBA with i) a carbon module, STOMATE describing the flow of carbon within the soil-plant-atmosphere continuum and ii) a dynamic vegetation module, inherited from the LPJ model, describing the evolution of natural vegetation with climate. Such effort was conducted between the LMD and LSCE laboratories.

Figure: History of the ORCHIDEE model development and of the project team development. 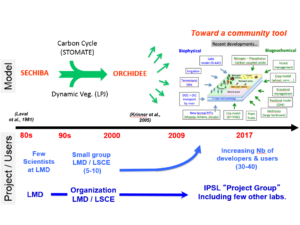 A team to follow and coordinate the model developements

After the mid 2000s, there has been an exponential increase in the number of users and developers in several laboratories: within IPSL (LSCE, LMD, LOCEAN), outside IPSL (SISYPHE in Paris and LGGE in Grenoble) and internationally (PKU university in China, UCLM Toledo in Spain, University of Antwerp (UA) and UGhent university in Belgium). The increase of users and associated projects was accompanied by a large number of new developments. In this context, the need to merge the new model “branches” into a common version became crucial especially to address integrated scientific questions, but it also became highly challenging. The main ORCHIDEE developers/users have thus decided to reinforce the previous organisation (carried by the IPSL) and to operate as a more structured project across laboratories. This process that started at LSCE was rapidly enlarged to the IPSL and few other national and international laboratories (listed above) with the objectives to formalize communication, developments, planning and decision making around the model. The reorganisation into a new project structure has been adapted to the size and ambitions of the group. This web site summarize the foundation of this recent organization.

About the ORCHIDEE project Team